The deceased is Russell Larsen, 51, of Benson, according to Cache County Sheriff’s Office officials.

“Early this morning Cache County Sheriff’s deputies responded to a report of an adult male face down in an irrigation pipe,” a previous statement said. “The pipe is approximately two feet in diameter.”

Larsen’s wife, Angie Hintze Larsen, posted on Facebook that it was she who found him.

“Monday morning started off just like any other day; Russ teased me as he gave me a kiss and walked out to start his day,” she wrote. “Around 7:15 the boys showed up and came in to ask where he was. All of his vehicles were here, but no Russ. We just kind of shrugged it off and figured he’d gone with someone to help them do something so they headed off to the job site without much thought or worry. I kept texting and calling and he wouldn’t answer, so I asked the boys if all of the horses were here — maybe he’d gone on a ride.”

Larsen then wrote she went out back to see if she could find him. Once she got to his shop, she called his phone again and it rang next to her.

“I knew he wouldn’t have gone far without his phone and had the almost instant impression that something was wrong,” she wrote. “I started to walk around the horse stalls, calling his name and came to the area where he’d told me he was working on a pump the night before. I could see a pipe that was open and realized it was big enough for him to fit in (barely) but couldn’t see anything down inside from where I was.”

She said she decided to check inside the pipe.

“As soon as I got close enough I could see his boots,” Larsen wrote. “He had fallen head first into the pipe which had about four feet of water in it at the bottom. He wasn’t moving. I tried with all of my might to pull him out but I couldn’t do it. I just kept screaming his name — I was screaming for help — no one was around. I reluctantly set his legs down and called my neighbor for help then immediately called 911.”

After her neighbor and officers arrived, they retrieved Russell Larsen from the pipe and began CPR, then continued to work on him in an ambulance. However, he was pronounced dead, she wrote.

It’s not clear how long he had been in the pipe. The investigation into the incident is ongoing.

Angie Larsen added: “Tender mercies have been pouring in. I can’t begin to thank you all. Please know that I feel your love and support. I promise I will read your texts and messages and listen to your voicemails — I just need to take it a little at a time. I can feel your love and I know I’m not alone, so thank you from the bottom of my heart.” 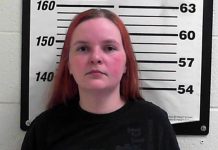