The incident occurred Nov. 25 on I-15 northbound at mile marker 339 in the Riverdale area, said a tweet from UHP.

Apple Fire expected to be contained by Aug. 17 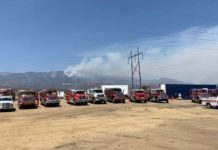