WEST VALLEY, Utah, Feb. 12, 2018 (Gephardt Daily) — Officials have released the name of a man who died Sunday when his vehicle plunged from the I-215 West overpass onto 3500 South in West Valley City.

The deceased has been identified by the Utah Highway Patrol as Jared P. Lund, 44, from New Harmony.

UHP Sgt. Nathan Croft told Gephardt Daily a Toyota Tundra driven by Lund was heading northbound on Interstate 215 West at approximately 4 p.m., when it went off the overpass and landed below on 3500 South. The Toyota then T-boned an eastbound GMC Envoy.

Lund, the only occupant of the Toyota, was pronounced deceased at the scene.

The male driver and female occupant of the GMC Envoy sustained serious injuries and were transported to a local hospital; they are expected to recover.

A tweet from the Utah Department of Transportation said SR-171 (3500 South) was closed in both directions, and the northbound I-215 West ramp to westbound 3500 South was also closed.

Investigators are looking into if there were any forms of impairment that may have contributed to the crash, but as of Monday afternoon, no obvious cause has been found. 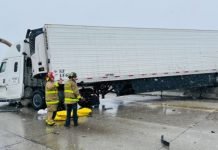