The incident occurred at approximately 7:45 p.m. Sunday. An investigation found the pesticide was an aluminium phosphide, but the sheriff’s statement said it’s unclear how or why this pesticide was used. Aluminium phosphide is highly toxic, and used as a rodenticide, insecticide, and fumigant for stored cereal grains, according to Wikipedia.

Coombs was transported to Wayne Community Health Center in Bicknell by ground ambulance, but was later declared deceased.

The clinic was then closed pending further investigation and evaluation of the incident. A temporary urgent care clinic was set up at the Bicknell Community Center.

“Out of an abundance of caution, responders and medical personnel were transported to other medical facilities for evaluation,” the initial news release said. “All personnel along with the building itself are being evaluated for contamination from this pesticide.”

The Utah National Guard 85th Weapons of Mass Destruction Civil Support Team was brought in to investigate the incident.

They deemed the clinic building safe and found there was no threat to the public. No hazardous readings were found within the building or near the deceased person.

The clinic reopened at 3 p.m. Monday for urgent care, and will return to normal business hours Tuesday. Medical staff have been cleared and are in good health.

County ambulances are also available and have been cleared of any hazardous materials. 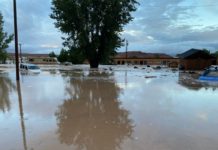