WEST VALLEY CITY, Utah, May 24, 2020 (Gephardt Daily) — Officials have released the name of the woman who died when she was struck by a vehicle late Friday night on 3300 South.

The victim has been identified as 23-year-old Shantel Sponsler.

The fatal incident, at 1251 W. 3300 South, was initially described as a hit-and-run auto-pedestrian crash, because the driver left the scene.

In a news release Sunday night, West Valley City Police said the driver was located a short while later.

“The driver reported not realizing what they hit and is cooperating,” WVCPD said.

Police were notified of the incident at about 11 p.m. Friday and arrived to find that Sponsler had died at the scene.

Officers remained in the area as they interviewed witnesses and began checking nearby  homes for any surveillance video that might show what had happened.

On Sunday night, WVCPD said the accident is still under investigation. 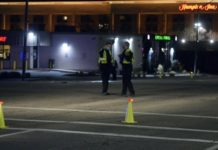