The deceased is Phyllis L. Pyle, from Auburn, Washington.

A news release from UHP said the accident happened about 6:54 p.m. when a husband and wife were attempting to cross State Route 89A.

“A Ford truck was traveling west on SR-89 turning south onto SR-89A. The driver of the truck failed to see the pedestrians in the cross walk due to the sun being in his eyes.

CPR was initiated on scene, but the woman later died at a Kanab area hospital, the news release said. 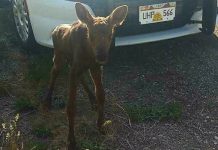