The deceased is Jacqueline Jacobs, 59, of Magna, said a news release from the Utah Highway Patrol.

Calls started coming in at 11:27 p.m., reporting that a Ford Crown Victoria sedan was traveling west in the eastbound lanes of I-84 near Morgan City, a news release from UHP said.

As several units responded, more calls came in, and at 11:23 p.m., a caller reported there had been a collision.

The wrong-way Ford had crashed head on into a semitrailer hauling onions, the news release said.

Troopers and medical personnel administered life-saving measures at the scene, but Jacobs, who was the car’s only occupant, succumbed to her injuries and was pronounced dead upon arrival at the hospital. 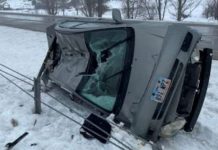 Drunk driving and speeding way up for Christmas on Utah’s interstates, but fatalities down