The wildfire, burning three miles northwest of Nephi, has burned 2,665 acres, said the update on the Utah Fire Info website.

“Tuesday, crews began the prep work of rehabilitating the roads, fences, and trails within the burned area,” the update said. “The dozer and handlines were tested by gusty winds, but all lines held strong. Cooler temperatures and relative humidity are expected Wednesday. Pockets of interior fire activity and smoke may still be seen from surrounding communities.”

The fire was caused by lightning, it has been determined.

There are no closures or evacuations as a result of the blaze and no structures are being threatened.

Currently one helicopter, four hand crews, four engines and a dozer are assigned to the fire. 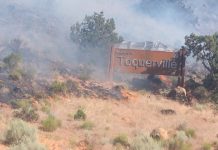 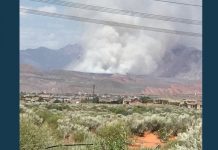 Anderson Junction Fire near Toquerville balloons from 50 to 500 acres