At about 1:29 p.m., traffic began to slow at 5500 South on northbound I-15 in Murray, a statement from Utah Highway Patrol says.

Two cars, a Mazda 3 and a Honda Civic, began to slow down due to slowing traffic ahead. A third vehicle, a Mazda CX-5, came up behind the two cars, and rear ended the Mazda 3, the UHP statement says.

“The impact caused the Mazda 3 to spin around in a counter clockwise motion and impact the rear of the Honda Civic,” the UHP statement says. “The Mazda 3 came to a rest facing South in lane four. The Mazda CX-5 came to a rest in lane two.”

Three brothers were in the Mazda 3 that was struck from behind, then spun into the Honda.

“The 15-year-old backseat passenger was transported to IMC with life-threatening injuries. Neither driver of the other cars were injured.

“Distracted driving is being investigated as a possible cause for the crash.” 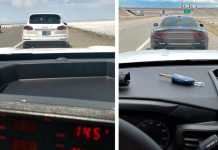