OGDEN, Utah, Nov. 12, 2019 (Gephardt Daily) — Police have identified the suspect in a double stabbing that occurred Monday at a bar on Ogden’s Historic 25th Street.

According to a probable cause statement filed in 2nd District Court in Ogden, police responded at about 3:42 p.m. to a report of a stabbing at the Historic Place bar at 162 25th St.

When they arrived, the officers made contact with a man who was “bleeding and clutching his chest,” the document states. Another man had “sustained a serious head injury that pierced the skull.”

Both victims were treated on scene by medical personnel and were transported to McKay-Dee Hospital.

A witness gave the officers a description of the suspect, later identified as Ricardo Godinez Morales, 25.

The officers found Morales inside the bar and noted that he had “slurred speech, red glassy eyes, and Ricardo had an odor of an alcoholic beverage on his person.”

According to the document, the police viewed security camera footage of the incident, which showed Morales drinking, arguing with someone, drawing a knife, aggressively stepping toward the first victim, who fell down on the ground, then chasing Victim 2 while swinging the knife toward him.

Morales was forced out of the bar at least twice by patrons who threw things at him, including a bar stool. When he again tried to enter the bar, a man who was walking by grabbed Morales from behind, threw him to the ground and pulled the knife out of his hands, the document says.

Morales had cuts on his hand from the knife and other injuries from patrons’ efforts to keep him out of the bar. He was treated by EMTs at the scene, then taken to Ogden Regional Medical Center before being booked into jail.

Morales has been charged on suspicion of two counts of aggravated assault, a second-degree felony; and intoxication, a class C misdemeanor. 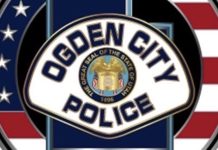 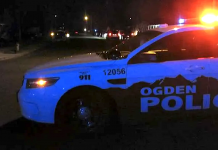