The news release said that Sunday at approximately 3:15 p.m., West Valley City Police received a report of a theft at a cellphone business at 3411 S. Redwood Road. The suspect in the case had fled the scene.

A West Valley City Police officer then spotted a person matching the suspect’s description outside a convenience store at 1940 W. 3500 South.

“The officer approached the suspect and the suspect fled on foot,” the news release said. “The initial officer and other officers pursued the suspect on foot. During the pursuit, the suspect entered the garage of a home located on Dana Shelby Court, encountered the homeowners and fled again.”

The suspect then entered a second home located at 3551 S. Jenelles Bay, where three children, ages 13, 10 and 9 years old were alone inside.

“Three officers made contact at the home and were informed by one of the children that the suspect was inside the home,” the news release said. “Officers entered the home and located the suspect. At some point during this encounter with the suspect, a West Valley City Police Officer fired his gun, striking the suspect.”

Smith died at the scene.

That officer has been with West Valley City Police just under two years and is assigned to the Patrol Unit.

All three West Valley City Police officers on scene were wearing body worn cameras and those cameras were all activated during this incident. The body worn camera video has been turned over to the Officer Involved Critical Incident Team from Unified Police Department for their review as they conduct the investigation into this incident.

“It is our intention to release as much information as possible in this case as soon as we are able to release it,” the news release goes on. “Transparency is a top priority for the West Valley City Police Department. We intend to work in cooperation with
investigators to ensure that we provide as much information to the public as possible surrounding this incident, while at the same time, ensuring that we do not compromise the investigation that is underway.”

No information was made available regarding the number of shots fired or whether Smith was armed. It’s also not clear if the suspect posed any threat to officers or the public during the incident.

Officials said Sunday that to their knowledge, Smith had no connection to either home.

The three children who were in the home at the time are safe and uninjured, police said.

UPD Lt. Brian Lohrke said officials submitted a request for a search warrant so they could enter the home to begin the investigation process.

Lohrke said the results of the investigation will be given to Salt Lake County District Attorney Sim Gill. 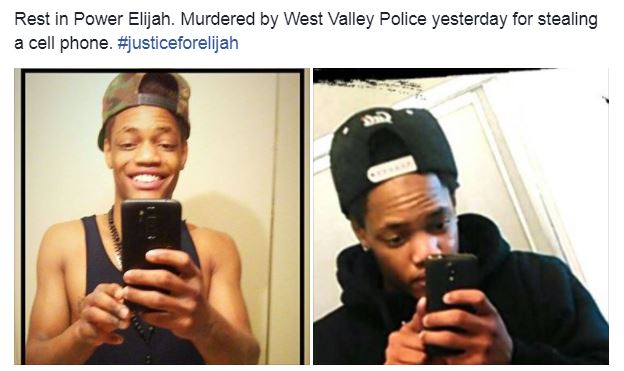 Black Lives Matter-Utah has held peaceful protests in the past when its membership believes people were shot or killed in part because they were black, and that a white person would likely have been spared in the same circumstances.

Gephardt Daily will continue to follow this story and provide more information as it becomes available.