ROY, Utah, Sept. 11, 2022 (Gephardt Daily) — A 39-year-old woman has been booked into the Weber County Jail following what police say was an alcohol and drug-induced crime spree near a Roy care center Saturday night.

Roy police say Natalie Hamilton stole her mother’s car in Ogden and then drove to Roy, where she crashed into two cars, attempted to carjack a motorist, tried breaking into three homes, and illegally entered a health care and rehabilitation center that had closed for the night.

Hamilton was arrested about 9:30 p.m. for investigation of more than a dozen charges, including robbery and receive/transfer of a stolen vehicle, both second-degree felonies; and criminal trespassing within a dwelling and DUI for alcohol and drugs, both class A misdemeanors. She’s being held without bail.

Police said Hamilton had been drinking alcohol prior to stealing the car, and doctors who evaluated her at an area hospital following her arrest “believed her to be under the influence of meth,” according to a probable cause statement filed in Ogden’s 2nd District Court.

“Natalie appeared to be under the influence of drugs and/or alcohol to a point in which she was a danger to her self and others,” police said in the statement. The woman also “appeared to have forgotten she was driving and seemed to be having hallucinations about what had actually occurred.”

Police say the car crashes and attempted break-ins all took place within a few blocks of Heritage Park, 2700 W. 5600 South. An “involved party” followed Hamilton throughout the crime spree and relayed the woman’s location to dispatchers over the phone, according to the police statement.

Officers initially responded to reports of a car crash at 9:16 p.m. near 2775 W. 5600 South, police said. Hamilton turned onto 2775 West, which is a dead-end street, and crashed into an unoccupied, parked car while trying to turn around, the police statement continues.

Hamilton then ran a stop sign on 5600 South and T-boned an eastbound vehicle, police said.

“Natalie exited the vehicle, which began rolling backwards down the street. One of the five witnesses to the crash was able to stop it and put it in park,” according to the police statement.

After abandoning the stolen car, the woman approached a motorist who had gotten out of her vehicle and asked the witness for a ride, police said.

“When the driver declined, [Hamilton] attempted to get in the driver’s seat to take the car” with the witness’ 14-year-old daughter still inside, according to the police statement. The woman and her daughter were able to get Hamilton out of the seat before she could drive away, the statement continues.

Hamilton then asked another bystander for help, requesting a ride and a Band-Aid, police said.

“The bystander took her to her nearby apartment. … She was told to wait at the door but unlawfully entered the home and entered a bedroom. She was told to leave but refused until she was escorted out by the occupants,” according to the probable cause statement.

Hamilton later tried to break into two other homes before finding an unlocked door at Heritage Park, where she attempted to “masquerade as a resident,” police said.

The woman attempted to gain access to several residents’ rooms and “engaged in tumultuous behavior” by shoving a 16-year-old care center employee, according to the probable cause statement.

Employees helped officers locate the woman, who “was causing a great deal of alarm,” police said. “Loud crashing noises could be heard through the center as we attempted to locate her in the building,” the police statement continues.

After locating Hamilton, police say she refused officers’ orders to surrender and get down on the ground. Officers physically took the woman to the ground and placed her in handcuffs, according to the police statement.

“She would later slip out of the handcuffs, causing further delay in her arrest and detention,” the statement continues.

Police said Hamilton has one prior DUI conviction and was driving on a suspended license. Other potential charges for the woman’s crime spree include: 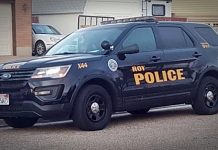 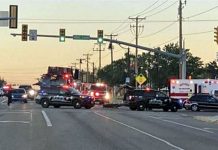 Roy City Police: Motorcyclist dies after being cut off, struck by turning car