WEST VALLEY CITY, Utah, Oct. 25, 2021 (Gephardt Daily) — A reward of up to $5,600 is now being offered for information leading to the arrest of a person of interest in the homicide of an 82-year-old West Valley City man.

“The reward has gone up again!” West Valley City Police Department said in a tweet Monday afternoon. “If you have information that will help lead to the arrest of Noel Munoz Lopez, we need to hear from you. Please help bring at least some peace of mind to the family of 82-year-old Farrell Bartschi.”

The U.S. Marshals Service initially announced a reward of up to $2,000 for information leading to the apprehension of Lopez, 34, “who has violated his parole and is a person of interest in the homicide” according to a previous statement by WVCPD.

The USMS reward offer was followed by one from Munoz’s relatives. “The family of homicide victim Farrell Bartschi is now offering an extra $2,000 reward, in addition to the $2,000 that the U.S. Marshals Service is offering, for information leading to the arrest of Noel Munoz Lopez,” the statement said.

Investigators believe he was driving a 2012 White Chevy Malibu with a Utah ‘In God We Trust’ license plate, number 9P6EE, at the time of the Oct. 4 homicide, which took place in front of a home near 3800 South 4200 West.

Police were originally notified of the deadly incident at 7:10 a.m. by a caller who reported hearing gunshots and seeing a man lying on the ground.

“It is unknown at this time what occurred leading up to the shooting,” police said. “We can, however, report the victim in this case has no known association with the people who live inside the home, nor any association with Mr. Lopez.” 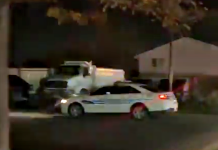