UTAH COUNTY, Utah, Jan. 14, 2022 (Gephardt Daily) — A 43-year-old Salem man may owe his life to Utah County Sheriff’s deputies who at first pursued his speeding vehicle in Hobble Creek Canyon and then tracked him in deep snow for several miles on Friday.

The man illegally passed a deputy in the canyon, says a Utah County Sheriff’s Office post on Facebook. The deputy turned on his emergency lights and attempted to stop the speeding car, but when speeds reached 70 miles an hour and the car was still pulling away, the deputy terminated the pursuit.

The car was located 9 miles up Left Fork Hobble Creek Canyon, where it had crashed, and deputies continued to search for the driver.

“Five Deputies, including a K9, tracked him in 2.5 feet of snow for nearly 4 miles,” UCSO said on Facebook.

The deputies found the man two hours later. He was naked in the river.

“He had significant abrasions, suffered from severe hypothermia, lost consciousness, and had to be carried to a side by side that took him to a LifeFlight helicopter,” UCSO said.

The unconscious man was flown to Utah Valley Hospital in serious condition and, despite being in sub-zero conditions for more than three hours, is expected to survive.

“Without the efforts of these five Deputies, this man would not have survived,” the Facebook post says. “A Utah Department of Public Safety helicopter also assisted with the search and Springville ambulance responded as well.” 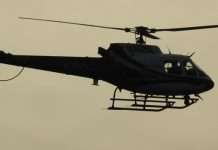