Investigators with the San Juan County Sheriff’s Office said the five students were driving on La Sal Loop Road south of Ken’s Lake around 7:30 a.m. when their 2003 Subaru Impreza left the road and rolled several times.

Three teens were ejected from the car. Fourteen-year-old Taylor Bryant and 16-year-old Connor Denney were pronounced dead at the scene. Seventeen-year-old Daniel McCrary was also thrown from the vehicle but survived.

Two other teens, 17-year-old Gage Moore and 14-year-old Tierney Demille were found inside the car. They, along with McCrary, were flown to outlying hospitals where they remained in critical condition Monday.

“The entire staff of Grand County School District is mourning yesterday’s tragedy, along with our students. It’s never easy to see young lives cut short, and incidents like this impact us all. This loss will affect the entire community. As a district, we’re doing our best to ensure that our students have the time to celebrate the lives of their peers, while also helping them to move on with their own lives.

“In this difficult time, we have made counselors available to any and all students who need them. Those counselors will remain available for as long as necessary. We are also encouraging our students, and the entire community of Moab, to lean on each other. We are stronger when we stand together, and we will need that strength to get us through this.”

The school district said counselors were available on site at both GCMS and GCHS Monday.

The San Juan County Sheriff’s Office believes excessive speed and alcohol were factors in the crash. All other details, including the events leading up to the deadly accident are still under investigation.

Anyone with information is being asked to call the San Juan County Sheriffs Office at 435-587-2237. Callers may remain anonymous. 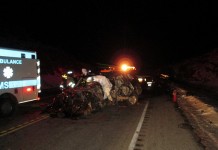