WASHINGTON COUNTY, Utah, Sept. 27, 2020 (Gephardt Daily) — The Veyo Pool Fire, which started late Sunday afternoon south of Veyo in Washington County, is now estimated at 400 acres, and one lane of Highway 18 is closed.

The blaze is being driven by 15 to 25 mph winds, and officials are asking drivers to use caution in the area for firefighter safety, Utah Fire Info tweeted a little after 8 p.m. Sunday.

Air and ground resources were working to suppress the fire, and additional air support was ordered, including four SEATS and two LATs, according to a tweet at about 7 p.m. At that time, the blaze had grown from about 20 acres to an estimated 75-100 acres within a half-hour.

Structures in the area are threatened, but no evacuations have been reported. The cause of the fire is under investigation. 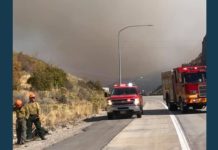 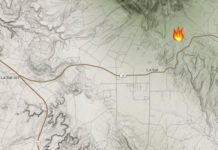 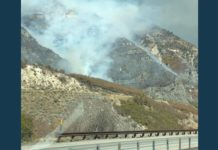