SALT LAKE CITY, Utah, April 17, 2020 (Gephardt Daily) — Utah Gov. Gary Herbert announced Friday that a plan is in place that could allow some of the state’s currently restricted business to reopen as soon as early May.

Social distancing, vigilant hand-washing and the wearing of masks will be just as important as they are now to help slow the spread of COVID-19, Herbert said at a news conference. Businesses that open will need to have enhanced sanitation practices and other precautionary measures. Herbert urged businesses to begin putting together plans.

Herbert added that people who are especially vulnerable to COVID-19 — including those age 60 and older and those with underlying medical conditions or compromised immune systems — will be advised to be more conservative about leaving their homes and interacting, in person, with the larger community.

All steps forward in the Utah Leads Together plan — which includes collaboration with county leaders — will be measured and data driven, Herbert said. He suggested the response would be less like turning on a light switch, and more like the slow turning of a dial.

Utah is still in the “Urgency” stage of its COVID-19 pandemic response, Herbert said. If the growth rate of COVID-19 cases in Utah continues to decline for two or more weeks, Utah will move into the “Stabilization” stage, he said.

Gyms may reopen, and dining inside restaurants may be approved with a required and enforceable social-distancing plan in place. Elective surgery may resume if facilities, hospital beds and protective equipment are available in great enough supply.

The Legislature has created an Public Emergency Response Task Force with the passing today of SB 3004, Herbert said.

Herbert also noted that different counties in the state may be in the red, orange, yellow or green stages of the pandemic response/economic recovery at the same time.

Herbert said he and other governors had a chance to communicate with Pres. Donald Trump on Thursday prior to Trump’s news conference, and some other governors seemed startled at the thought that they should be preparing their own economic recovery plan.

“A lot of states were scrambling, trying to find a way to incorporate Trump’s plan,” Herbert said. “We in Utah are not scrambling. We have a plan in place, and it’s been in place for a month … doing the things it was designed to do.”

“Good things are happening,” he said. “We have a plan in place, a pathway forward,” adding that Utah is “getting good results.” 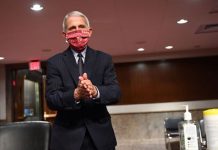