The governor’s declaration allows the state to continue providing assistance to local governments in Grand, Emery and Wayne counties, and seeks to raise awareness about the dangers of flash flooding, according to the governor’s office.

The governor also offered condolences to the family of Jetal Agnihotri, of Tucson, Arizona, who was hiking in Zion National Park during sudden flooding Friday. Agnihorti’s body was recovered from the Virgin River on Monday night.

“We also urge everyone to take flash flood warnings very seriously,” Cox said. “We mourn the loss of Jetal Agnihotri of Tucson and pray for her loved ones. About 170 individuals spent 1,700 hours on search and rescue, and we can’t thank them enough for their relentless efforts.”

“I’m shocked by the size and scope of the flooding that swept through Moab, causing damage to homes, businesses and local infrastructure,” she said. “Fortunately, I’m hopeful for a full recovery.

“Moab is open for business and the cleanup is well underway. If you want to help, here’s how: Visit Moab. Locals need your business and support — now more than ever.”

The Utah Department of Public Safety has been monitoring flood conditions, debris flows and mudslides throughout the state, according to the governor’s office.

The governor’s state of emergency will remain in effect for 30 days. 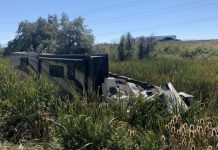