SALT LAKE CITY, Utah, Oct. 29. 2019 (Gephardt Daily) — The Utah Department of Health has released a statement saying vaping products containing THC are the likely cause of vaping-related lung injuries being seen in Utah and across the U.S.

The temporary restraining order was prompted by a lawsuit filed against UDOH by seven Utah vaping companies that claim the health department’s order unfairly targeted their businesses and could lead to their financial ruin.

The plaintiffs’ suit maintained “UDOH has no scientific evidence that vaping flavored electronic cigarette products is the cause of the recent illnesses that underpins the reason for the Emergency Rule.

“The effect of the Emergency Rule is that Plaintiffs will be deprived of their vested property interests in and to their general tobacco retailer licenses,” the lawsuit said.

Judge Kelly agreed with the plaintiffs, first noting that nowhere in the UDOH analysis did the word “flavor” appear.

“The UDOH Investigation Report does not link the wave of recent lung illnesses to flavored vape products, but, instead, links the lung ailments to these persons’ use of black market THC cartridges.”

Monday’s court decision upholds part of USDOH’s emergency order, including the posting of signs at all vaping outlets warning consumers about the potential dangers of e-cigarette use.

“The plaintiffs who brought this suit represent a small minority of tobacco businesses,” the statement said. “Most general tobacco retailers and specialty tobacco shops are already in compliance with the emergency rule and we encourage them to remain so.”

The findings in Utah mirror those of both the Centers for Disease Control and Prevention and the U.S. Food and Drug Administration. Both show a strong connection between EVALI and the use of black market THC vaping devices.

As of Friday, 1,299 people in 49 states, Washington, D.C. and the U.S. Virgin Islands have been stricken with the potentially lethal lung ailment, with 34 deaths reported thus far.

Eighty-five percent of those patients say they vaped THC, while 10% said they vaped only tobacco products.

While the Utah Department of Health is discouraging all forms of vaping, the organization is scrutinizing the use of THC vaping to treat other medical conditions.

If medical cannabis patients choose to continue vaping THC to treat their medical conditions, the UDOH says they should consider the following guidelines: 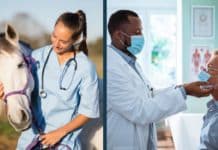