SOUTH JORDAN, UTAH – September 3, 2015 (Gephardt Daily) – The 100 deadliest days of the year for motorists are almost over, but according to recent statistics, it is definitely no time to ease up on using caution on the roadways.

In 2007, Utah fatality rates were at an all time high with 299 deaths but with improvements in safety laws, including the use of seat belts, and heightened awareness of distracted driving, by the end of 2013, Utah had seen a 25 percent decrease in fatalities.

But now, the downward trend has stopped and has almost come back full circle

If the trend continues, close to 300 deaths will happen on Utah’s roads by the close of this year. So what is leading to this increase?

“Distracted driving, speed and failure to wear seat belts are a big problem,” said Cpl. Justin Cheney, Utah Highway Patrol. “When we look at distractions they can be broken down into three categories. Manual, like using a cell phone or eating, visual, like looking at a crash on the side of the road or a billboard, and cognitive, which is where your mind is on something other than driving.”

But the highest increase in fatalities comes from drivers and passengers not wearing seat belts.

By the end of 2014, 72 people, or 28 percent of fatalities, died while not wearing a seat belt. So far in 2015, nearly 100 unrestrained people have already died. That is 55 percent of all fatalities so far, with four months still left in this year.

“Seat belts save lives, put them on! It’s not just your life that is affected if you get hurt or killed in a crash. Drivers need to take the responsibility of driving more seriously so that everyone can return home at the end of the day,” said Cpl. Cheney.

Failure to wear a seat belt is now a primary offense for all drivers in Utah. According to Utah State Legislature, HB79 came into affect on May 12, 2015. In the past, law enforcement officials could cite adult drivers not wearing a seat belts only after they had been pulled over for another violation. For those 18 and younger, use of a seat belt has already been a primary offense for several years.

Angel Merrill of Salt Lake City, said she used to never wear a seat belt, but thinks differently about it now. “I always thought if I got in a wreck and it was my time to go then seat belt or no seat belt wouldn’t change that,” said Merrill. “Now that I’m older and always have my grand-kids, I make sure I try and set a good example for them.”

But does a change in the law really persuade drivers to buckle up every time? Merrill admits though that now, when she is on the freeway or other major road she wears her seat belt because she doesn’t want a ticket. “I don’t like it rubbing on my neck, but I buckle up because it’s the law,” said Merrill. “Do I like feeling restrained in my seat? No, not exactly. My personal choice would be not wear it if it was not against the law.”

Geneale Shepard, also of Salt Lake City, never used to wear her seat belt, but the decision to make the change came after she, and several of her friends, were involved in a few accidents. “I have been in a couple fender benders and even though they were not major, I realized if I had not had my seat belt on, and it was more serious,  I could have been seriously been hurt,” said Shepherd. “I also had a relative of mine help me get into the habit of putting it on every time I get into a vehicle.”

Cpl. Cheney said that drivers need to also plan enough time to get where they are going and give themselves some extra time. “If drivers will do this, then they will not be in such a hurry if something happens to delay them,” said Cheney.

Utah however still ranks among the top ten lowest fatality rates nationwide. According to Insurance Institute for Highway Safety, the national average is 10.3 deaths per 100,000 people. The fatality rate ranged from a low of 3.1 in the District of Columbia to a high of 22.6 in Montana. Utah, with a rate of 7.6, ranks as the ninth lowest fatality rate in the county.

Update: Passenger, 15, suffers life-threatening injuries in I-15 crash in Murray 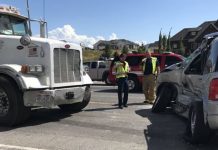 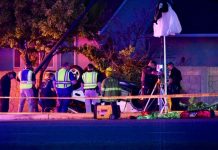