Troopers were able to spike the tires of the vehicle the three were traveling in about three miles west of Delle at mile marker 73, and to take them into custody at approximately 3:30 p.m., UHP Lt. Nick Street told Gephardt Daily.

“We had a little bit of advance notice that they were from Humboldt County and may have been traveling in that direction at that time, so we were able to put some contingencies in place in case they didn’t want to submit to being placed in custody,” Street said. “We made sure we had spikes ready to go at the time we decided to attempt a traffic stop and fortunately we did and it worked and we were able to safety get everybody into custody.”

Street said the Department of Public Safety helicopter was also ready to assist if necessary.

The three have been booked into Tooele County Jail and will be extradited to Humboldt County.

“We also used some evidence collectors from our State Bureau of Investigation to help them out with any evidentiary needs they needed at the car,” Street added.

The identities of the three have not been released. 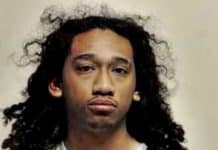