SALT LAKE CITY, Utah, Jan. 19, 2021 (Gephardt Daily) — Law enforcement agencies in Utah and across the country are remaining vigilant against threats of possible political violence, despite the small turnout at planned protests over the weekend.

The mobilization of hundreds of National Guard soldiers, along with Utah Highway Patrol troopers, is expected to last through Thursday in keeping with the state of emergency declared last week by Gov. Spencer Cox.

At the same time, investigators on a state and national level are beginning to scrutinize the possible role extremist groups may have played in the planning and execution of the violent Jan. 6 takeover of the U.S. Capitol in Washington, D.C.

Seth Brysk, regional director for the Anti-Defamation League covering Utah, Northern California and Hawaii, told Gephardt Daily that while the ADL had not identified any threats tied to a specific group, there is plenty of cause for concern.

“While we don’t see specific threats to any specific targets, there is a bit of chatter on line,” Brysk said. “As we have seen in the past, when they talk about these actions they follow up those words with action.”

In Utah, Sunday, a small group of demonstrators gathered at the state Capitol, while more than one hundred Utah National Guard soldiers and Highway Patrol troopers formed a perimeter around the State House complex.

The majority of the armed demonstrators — about a dozen in all — identified themselves as Boogaloo Boys. While sporting the group’s standard ensemble of splash Hawaiian shirts, assault rifles, and handguns, a couple of masked men, including one with a bullhorn, explained to a small crowd that Boogaloo Boys were opposed to government tyranny, President-elect Joe Biden and the “dictator Donald Trump … ”

The man with the bullhorn did not discuss the group’s historic ties to white supremacy or its ongoing advocacy of an armed insurrection against the United States government.

According to the Southern Poverty Law Center’s Hate Watch blog, the Boogaloo Boys movement is rooted in an “overwhelmingly white online subculture” whose followers are often clad in Hawaiian shirts, and refer to the “big luau” — a term derived from the word “boogaloo,” and associated with racist violence, and “an explicit call for race war.”

Other right-wing extremists who are reportedly being scrutinized by local and federal law enforcement have also made recent appearances on Utah’s Capitol Hill.

On Jan. 6, the day the U.S. Capitol was overrun, members of the Utah Proud Boys chapter arrived on Utah’s Capitol Hill and quietly surveyed the scene as a couple of hundred Trump supporters railed against the vote in Congress certifying Biden’s win.

Several demonstrators who were with the Utah Proud Boys wore emblems representing other anti-government movements, including the Oath Keepers and the Three Percenters. All three groups, according to the ADL, share ideologies and are part of a broader anti-government “Patriot” movement, which includes militia groups, tax protesters and sovereign citizens.

Federal prosecutors have filed charges against three alleged members of the Oath Keepers, including Thomas Edward Caldwell, a 65-year-old Virginia man who is said to be the group’s leader. Investigators say Caldwell was involved in “planning and coordinating” the break-in of the U.S. Capitol two weeks ago. 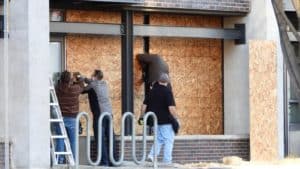 In downtown Salt Lake City Tuesday, windows remained boarded up at both the City-County Building and the Matheson Court House in anticipation of possible violence.

While authorities were heartened that protests did not break out over the weekend as anticipated, they say they will remain on alert until they feel it is safe to do otherwise. 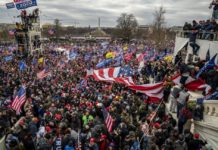 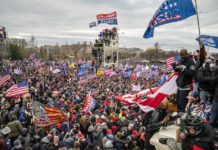