At first, Sandy refused to believe her doctor’s diagnosis. The young teenager keeping it a closely guarded secret, known only to family and a close circle of friends.

For years she lived in a state of denial, until one day she made the disturbing realization — her doctors had spoken the truth.

She could no longer see color.

Her field of vision was growing darker and seemingly smaller everyday.

Yet, despite the onset of blindness, Sandy moved on with her life, getting married, having children while using every tool at her disposal to mitigate her disease.

It’s a world she’s lived in for more than four decades, until one day, late last year, when an unexpected phone call changed everything. It was a doctor telling her of a new procedure that would do the unimaginable — restore some of Sandy’s eyesight for the first time since the 1970’s.

Six months later, Sandy arrived in Minneapolis at the University of Minnesota’s School of Ophthalmology.  It was there doctors would fit her with the so-called bionic eye.  If all went as planned, the device would send electrical impulses to Sandy’s brain allowing her to “see” for the first time since her children’s adolescence.

Doctors warned Sandy her restored eyesight would be a far cry from what a normal person sees, but for her — and people like her — the opportunity to recognize loved ones and notice her surroundings would be nothing short of a miracle.

But the question remained, would the procedure work for Sandy?

To see the dramatic outcome of Sandy’s Minneapolis visit, click on the video player above.

In Her Own Words

(Click the images below to see and hear the whole story.) 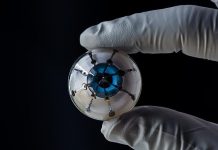 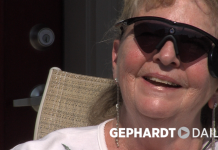 One month on: South Jordan woman talks about learning to see again after 40 years of darkness 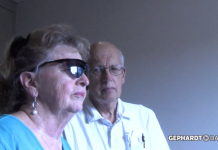 Video: The gift of sight restored for Utah woman blind for 40 years