BLAINE, Minn., July 25, 2022 (Gephardt Daily) — Utah’s Tony Finau rallied from a five-stroke deficit to win the 3M Open on Sunday and then celebrated his third PGA Tour victory with his family.

Piercy struggled on the back nine, including a triple-bogey on No. 14, allowing Finau to seize the victory with three straight birdies on Nos. 14-16 — including a 32-foot birdie putt on No. 15.

“I played about as clean of a tournament as I’ve ever played from tee to green,” Finau said during a news conference after Sunday’s final round. “I hit a lot of fairways, I hit a lot of greens, and I stayed patient with my putter.”

Finau tapped in a bogey putt on No. 18 to cap a final-round 67 and finish the tournament 17-under. It was his first PGA Tour win witnessed by his family, he said.

“This one I’ll remember really forever,” Finau said. “I didn’t have them there with me for either of my two (previous) wins, so this one’s extremely special. … To have my kids witness me winning on the 18th green, again it’s kind of what dreams are made of. For that to come to fruition for me and our family today is very special.”

Despite his solid play, Finau was chasing the leaders throughout the tournament and entered Sunday’s final round at 13-under, trailing Piercy (18-under) and Emiliano Grillo (14-under), and tied with Doug Ghim.

Finau said he learned he had taken over the lead when he reached No. 16.

“My heart almost skipped a beat,” he said. “I couldn’t believe it.”

It made for “quite a different feeling” at the No. 17 tee, he said, realizing he could close out his third PGA Tour victory.

“It seemed like Scott wasn’t letting up all tournament,” Finau said. “So to all of a sudden have the lead, I will say I got quite nervous on 17 just because it was a whole different feel than how the week was going. I was never near the lead. I was near the top of the leaderboard, but I was never within four or five shots. All of a sudden I was the one leading the golf tournament.”

Piercy’s final-round 76 left him at 13-under, tied with James Hahn and Tom Hoge in fourth place. Grillo and Sungjae Im tied for second at 14-under.

With the win, Finau moves up to 17th in the FedEx Cup standings. 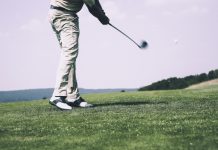 Falling down. Getting up. Dusting off. Like. A. Boss! ‘The Todd and Erin Nooner’