He said the driver of the semitrailer was able to get out safely and there were no injuries as a result of the fire.

Zaugg said the first call reporting the burning semi came in at about 7:01 p.m.

Utah Department of Transportation initially estimated the scene would be cleared shortly after 8 p.m., and later extended that time to 10 p.m.

The scene still wasn’t cleared at 10:30 p.m., and Zaugg said the severely damaged condition of the semi was complicating its removal. He said the trailer may have to be hauled away separately.

The cause of the fire was still under investigation Sunday night. 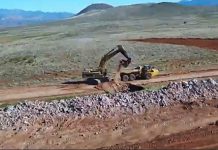