The man in custody has been identified as Jayson John Dean, 21, according to a news release from the Uintah County Sheriff’s Office Friday morning. Dean is a Vernal resident who recently relocated from California. He is being held on two counts of attempted homicide.

“It is believed that the altercation began when Dean suspected the victims of taking property from him,” the news release said. “It is also believed that there was a party at the residence the night before where all the involved parties were present. Drugs and alcohol are both believed to be contributing factors in this incident.”

Dispatchers received reports of shots fired near 660 South and 2500 West at 6:30 a.m., the news release said. Maeser is three miles west of Vernal.

“Before deputies arrived, one wounded man made it down the street from where the shooting happened, was picked up by a ‘concerned citizen’ and driven to Ashley Regional Medical Center,” the news release said. “Another wounded man left the scene in a black Pontiac Grand Am that later crashed into a semaphore pole at the intersection of 2000 West and 500 North. The car has one bullet hole by the gas tank and one in the rear passenger door.”

An ambulance transported the man to Ashley Regional Medical Center, which is in Vernal.

The investigation continues to be ongoing. 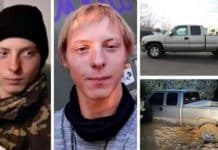