WEST JORDAN, Utah, Aug. 20, 2017 (Gephardt Daily) — The Utah Department of Transportation closed Bangerter Highway near 7000 South on Saturday night so that crews could install a new pedestrian bridge as part of the Bangerter Interchanges project.

According to a UDOT news release, the department is building a “freeway-like overpass at 7000 S.”

The new pedestrian bridge replaces one that was removed earlier this year to make room for the overpass.

According to the release:

The bridge is 14 feet 3 inches tall and has an 18-foot clearance height. The total weight of the bridge without the concrete walkway is 286,670 pounds. 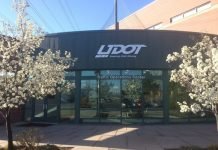