HILL AIR FORCE BASE, Utah, June 26, 2022 (Gephardt Daily) — The Warriors of the Wasatch airshow made a strong comeback this weekend after a four-year hiatus.

The multi-day event, which was scheduled to run through about 4:30 p.m. Sunday, drew crowds so large Saturday that Hill Air Force Base was forced to temporarily close its West Gate, except to base residents.

Due to limited parking, guests have been asked to catch a shuttle bus from the Clearfield TRAX station for Sunday’s show.

Hill AFB warned arriving visitors Sunday that the parking lot at the TRAX station is filled almost to capacity.

Despite the frustration at long lines and traffic, fans were delighted to watch the F-35A Lightning II Demonstration Team perform for at home for the first time ever. The team had been scheduled to perform at the 2020 air show after being assigned to Hill Air Force Base in 2019., but the show was canceled due to COVID-19 concerns.

It was estimated a half-million people would flock to the multi-day event.

Attendance figures have yet to be provided.

For more details on the wildly popular show, click here.

Hill Air Force Base shared photos from the event, which you can view below:

The photo above shows the size of the crowd Saturday afternoon.

And the photo below shows the view U.S. Army Golden Knight had of the crowd at about the same time.

Students and other attendees were treated to a STEM display set up in a building at Hill Air Force Base and
show organizers shared mid-air closeups of some of the scheduled crafts on Friday, to whet appetites. 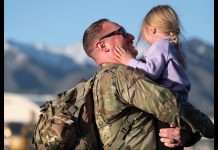