OGDEN, Utah, June 13, 2022 (Gephardt Daily) — The Weber County Animal Shelter has announced it is in crisis mode, which could be a death knell for stray cats.

Citing under-staffing and rising numbers of animal tenants, the shelter has announced a 30-day hold on key services.

As of 2:45 p.m. Tuesday, the Facebook announcement had attracted 78 comments, 212 likes and 383 shares since it was posted Friday at noon, most from people offering to volunteer at the shelter.

The center is at 150% animal capacity, according to the post, and the 30-day service suspensions are for owner-surrenders and owner-sought euthanasia requests done for medical reasons.

The shelter is the largest north of Salt Lake City, one of only two in Weber County.

It’s a no-kill shelter “and we’re trying to keep it that way,” said Merrin Hansen, a shelter administrator.

The shelter is still accepting stray and feral cats. But with their numbers and low adoption rates, Hansen said, with the current pressures some may soon have to be euthanized.

The number of animals at the shelter is approaching 150, said Hansen, who was the only employee staffer available on-site Monday when she spoke to Gephardt Daily.

The shelter normally operates best with 80-90 animals she said. Owner-surrenders and owner-requested euthanasia are labor-intensive and require several staffers involvement at a time with required testing and clearances. 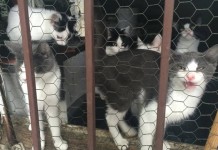 Condemned Home Found With Over 50 Cats Inside