WEST JORDAN, Utah, May 15, 2020 (Gephardt Daily) — A grieving West Jordan father says his family is heartbroken after the light of their life, daughter Chynna, was found dead in Ogden Canyon this week.

But what hurts almost as much the family says, is that they, along with friends, and even an unwitting stranger, tried to find and save Chynna, 30, while law enforcement did not respond as hoped.

“All we want is to reach out to police and have them help,” Sefu Toilolo said in an interview with Gephardt Daily. “Don’t wait for the body.”

Weber County officials revealed on Wednesday that they had found a body in Ogden Canyon a day earlier. On Thursday, they confirmed the victim’s name.

“The Weber County Sheriff’s Office has identified the deceased female in the suspicious death case as 30-year-old Lopine ‘Chynna’ Toilolo,” the notice says.

“The sheriff’s office would like to express our deepest condolences to the family, friends and community of Chynna. The investigation is still ongoing and there is no further information to release at this time.”

An earlier statement revealed that at 5:51 p.m. Tuesday, a 911 call alerted officials to a body in the area of 400 Ogden Canyon, close to the bank of the Weber River. Investigators had been on scene overnight and into the next day, documenting possible evidence, the Wednesday statement says.

“We would like to thank all those involved in this investigation for their dedicated work,” the statement says.

“What work had they done? Nothing. My family and friends looked for my daughter,” Sefu Toilolo said, his voice breaking with emotion.

“I’m crying because I’m so upset,” he said. “I still could have my daughter today if police do their job.”

Toilolo said his daughter was almost never out of social media and phone contact. The last time he saw Chynna, he said, was when she left the West Jordan home they all shared, saying she was going out with friends.

Toilolo said when his daughter didn’t return by late that night, his wife, Terrie, tried to call Chynna multiple times, and each time, the call went to voicemail.

“My daughter knows when I don’t hear from her late at night, she will text,” Sefu Toilolo said. “She will say, ‘I am delayed, I’m OK.'”

After multiple calls, Chynna’s parents received a text from her phone.

“My daughter sent a text message to my wife, her mom, that said ‘I’m on my way home.’ The weirdest thing about that was my wife called her right back, and it went straight to voicemail again. That tells me he is texting like she’s OK, but she wasn’t.”

The “he” Toilolo referenced was Chynna’s ex-boyfriend, a Pleasant View man whose court record shows he was charged with assault in early December after reportedly striking his girlfriend (unnamed in the probable cause statement) multiple times with a closed fist. His trial in the case is pending.

Because the man has not been charged or named by law enforcement officials in connection to Chynna’s disappearance, Gephardt Daily will not use his name at this time.

Toilolo said his family was able to check Chynna’s phone records, which showed her last call on Saturday was made to her ex-boyfriend.

“We knew she wanted to see his kids,” Toilolo said. “She loved those kids. We didn’t want her to see him. She made excuses. He went to jail for beating on my daughter last Christmas. He beat her and left her in a parking lot.”

The family went to Weber County on Monday and papered the area with missing person’s flyers. They focused on the townhouse complex where the ex-boyfriend lives, Toilolo said. They talked to neighbors who reported hearing a woman’s screams, and her telling someone she wanted her phone back and she wanted to leave, Toilolo said.

One neighbor reported a woman knocking on her window, Toilolo said.

Toilolo said the woman told him an officer arrived and walked through the townhouse complex, by then quiet, but did not knock on the ex-boyfriend’s door, and did not contact the caller before leaving.

“My daughter was there at the same time,” Toilolo told Gephardt Daily. “If they would do their job, knock on doors, ask some questions, my daughter would be alive.

The female neighbor reportedly told Toilolo she last saw the distressed woman at 5 a.m., leaning on the boyfriend’s car, as if she were about to get in. She took a photo in which the woman’s face was turned away. Toilolo believes the photo shows his daughter.

“When we told them (law enforcement) we had pictures, that’s when they were interested,” Toilolo said. “By the time they found my daughter, it was too late.”

He is also disappointed with the West Jordan Police Department, which family members contacted on Sunday, Toilolo said. They declined to open a missing person’s case because Chynna was an adult, he said.

“They said because she’s an adult, there’s nothing they can do. They say maybe your daughter is upset and she didn’t want to call you guys. It’s so frustrating. Families know their kid.”

Toilolo said law enforcement has since talked to the ex-boyfriend, who reportedly said Chynna called an Uber and left his residence. No Uber charges show on her credit card records, Toilolo said.

A Weber County Sheriff’s official said at a news conference that his department is following up on leads, but details are not being shared at this time.

“I’m so sorry for her,” Toilolo said of Chynna. “I’m just upset. My daughter should be here, now, yelling at me for putting her face in the news. I still think I would have her if they had knocked on doors after the 911 call.

“And now I’ve got to bury my daughter. We love our Chynna. We miss her. Now she’s in her Heavenly Father’s hands.” 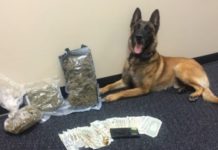