WEST VALLEY CITY, Utah, Aug. 1, 2016 (Gephardt Daily) — Two West Valley City brothers have been arrested in connection with a weekend drug bust at their family residence, where more than 50 juveniles and 40 adults were found partying — many of them using illegal drugs or drinking alcohol at an age at which consumption is prohibited.

The two suspects live with their parents at 5509 Deer Meadow Circle. The arrest fact sheets stated that Christian J. Alvarez, 20, and Edwin A. Alvarez, age unspecified, have each been booked on one count each of reckless endangerment; use or possession of a drug; and selling, offering or furnishing an alcoholic product.

In addition, Edwin Alvarez faces a charge of possession of more than one ounce of marijuana or spice.

The arrest fact sheet also stated that the residence is well known for hosting large parties for underage juveniles.

It was a neighbor’s call about a loud party early Sunday morning that led West Valley police to the gathering.

“Usually, when we get things going, it’s a pretty well-oiled machine. We have people to identify, people to have them (party attendees) blow into a breath tester. We have guys that can handle citations and referrals.

“For lack of a better term, it’s kind of like an assembly line.”

“We got officers in the area to pretty much lock down the area. We went inside. For officer safety, we went inside, brought everybody outside.”

Once everyone was out, officers found a couple of firearms on the ground, and they found marijuana paraphernalia and possible drugs in front of the house.

“I don’t know that it’s been tested yet, but it was a white powder substance, so it’s going to be either meth or cocaine,” Burke said.

“If they’re under 21, we usually look at them, and if they look like they’ve been consuming alcohol or something, then we have a breath tester,” Burke said. “If they’re 18, 19, 20, then we usually write them a ticket and send them away. If they’re under 18, we’ll refer them to juvenile court and have a parent come pick them up.”

Parents were not happy when they arrived.

“No, they’re usually not,” Burke said. “It’s part of being a parent, though. I’ve done this for quite a while, and you get a mix where they (parents) are angry at police or they’re angry at the kids. We just can’t let them (juveniles) walk on the streets, so we need to get mom and dad out of bed and let them be parents.” 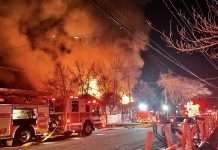