A tweet from WVCPD Tuesday afternoon said: “PERSON OF INTEREST: Edwin Carrillo, also goes by ‘Shorty,’ is wanted in connection with a shooting homicide that occurred Monday. Carrillo is 40 years old, has ‘ORGULLO’ tattooed along his hairline. He is 5’3″, thin build. Information or tips, please call 801-840-4000.”

Roxanne Vainuku, spokesperson for WVCPD, said officers and fire department medical personnel were dispatched at about 7:10 p.m. on a report of a gunshot wound.

“We think the suspect and the victim are known to each other,” Vainuku told Gephardt Daily. “They met at this location, and apparently there was some sort of altercation. The victim was shot at least once, and the suspect fled on foot.”

WVCPD later tweeted that “we were dispatched to a call of a man shot near 1400 W. 3500 South. The 36-year-old man was taken to the hospital in critical condition. He has since died from his injuries.”

Police initially said the shooting occurred at a different location in the area. 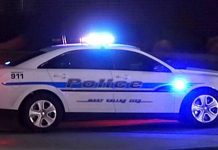