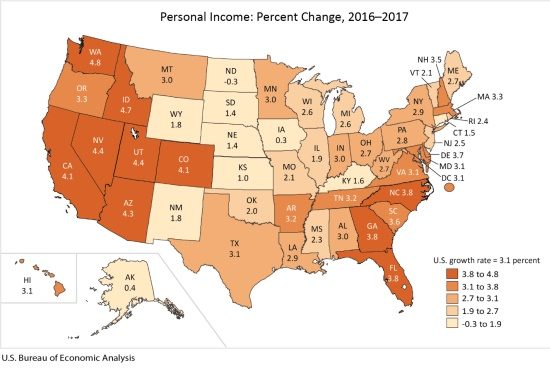 March 28 (UPI) — Several states west of Texas had wage growth rates of more than 4 percent, the highest rates in the nation over the past year, according to the U.S. Department of Commerce.

Washington had the highest growth rate with a 4.8 percent increase in personal income between 2016 and 2017, the survey found. Idaho was a close second with a 4.7 percent spike, according to the survey.

The average income growth rate across the United States was 3.1 percent.

Other western states with increases of more than 4 percent are: Colorado and California with 4.1 percent; Arizona with 4.3 percent; and Nevada and Utah with 4.4 percent.

The Commerce Department’s Bureau of Economic Analysis said the retail industry was the biggest factor of Washington’s wage growth.

Retail trade earnings increased 15.3 percent in Washington over the past year, compared to 2.9 percent in the rest of the country.

The BEA found that Idaho’s growth rate was due to the increase in durable goods manufacturing, which increased 9.7 percent in the state, compared to 2 percent elsewhere in the nation. Oregon was the only West Coast state under 4 percent with a 3.3 percent increase.

Most states saw growth rates well under the 3.1 percent average, and North Dakota was the only state to see a drop with a -0.3 percent wage decline.

Florida, Georgia and North Carolina saw the highest increases outside of the Western U.S., as each state saw a 3.8 percent increase.