According to the Bureau of Land Management in Nevada, the Goshute Fire wildfire was first reported at 4:29 p.m. Saturday and continued to grow throughout the night and into Sunday.

Time lapse video recorded by a U.S. Department of Forestry camera captured eerie images of as the fire ebb and flowed. As the sun rose over eastern Elko County the growth of the high-elevation fire was evident.

Still images captured by Gephardt Daily shortly after the mountaintop blaze was first reported Saturday show the growing intensity of the fire as it burned in steep, forested terrain.

Ariel firefighting resources, including tankers, guide planes and helicopters have been dispatched from Twin Falls, Salt Lake City and Cedar City to try and douse the blaze, according to real time radar tracking from the website Flightradar24.

The cause of the blaze is still undetermined. 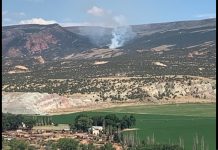