The deadly incident took place Tuesday afternoon near 12th Street and Depot Drive at about 3:11 p.m.

According to Ogden Deputy Police Chief Eric Young, the man who was killed was a robbery suspect, wanted in connection with a series of recent hold-ups in the Davis and Weber county area.

Young said Ogden officers were assisting the Woods Cross Police Department in the robbery investigations when they tracked at least one of the suspects to a residence on 7th Street.

Ogden PD officers laid spikes in front of the suspect’s vehicle. As the suspect drove off, at least one of the tires was blown out.

The man led police on a three-mile chase before coming to a stop at 12th Street and Depot Drive.

Young said when officers ordered the man to surrender he jumped from the vehicle and pointed a weapon at police.

At least one Ogden officer opened fire, fatally wounding the suspect, who died a short while later at McKay Dee Hospital.

His identity has yet to be released.

Police say one of two robbery suspects they were seeking has been accounted for.

A third suspect remains at large.

Officers from another jurisdiction will be taking over the Ogden investigation in accordance with police shooting protocols. 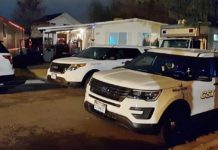