PINEVIEW RESERVOIR, Utah, June 5, 2021 (Gephardt Daily) — A woman was flown to a hospital Saturday after being thrown from a wave runner at Pineview Reservoir.

The Weber Fire District says the woman was one of two people on a watercraft that was jumping waves, when both flew off into the water.

The district says bystanders saw that the woman was seriously injured and tried to stabilize her in the water until first responders could get there.

Medics managed to load the woman onto a back board, get her out of the water and take her to the AirLife Helicopter waiting at the marina. 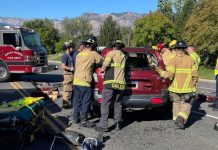 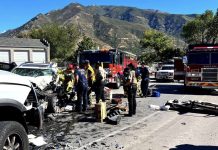