RIVERDALE, Utah, April 30, 2022 (Gephardt Daily) — A Riverdale woman died from what police say was a self-inflicted gunshot wound after an initial call from a man who said his wife had fired a weapon inside their home.

Police met the caller outside the home.

As officers approached the house, they encountered a woman who retreated back into the residence.

“Moments later the female fired multiple gunshots through the window at the officers,” says a statement released by the Riverdale Police Department.

“The officers took cover and contained the female suspect to the residence. The Ogden Metro Swat Team responded and attempted to contact the female who was inside the home.

“After several attempts to contact the female with no success the SWAT team entered the home and found her deceased from a self-inflicted gunshot wound.”

No Riverdale officers fired their guns during the incident.

The name of the victim is being withheld while family members are notified.

People having suicidal thoughts are urged to call the National Suicide Prevention hotline at 800-273-8255. The line is open 24 hours a day, and can serve people who speak English or Spanish. 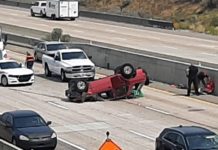 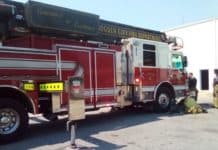 All smoke, no fire draws crews to Ogden storage facility