According to a Utah Highway Patrol news release, the F250 was westbound on SR-59, which has a single lane.

“Near milepost 18, the driver of the F250 lost control and crossed the center lane into eastbound traffic. Eastbound SR-59 has two lanes,” the news release states.

As the F250 crossed the center line, it struck an eastbound Ford Fiesta and kept moving until it finally came to rest facing southwest off the eastbound shoulder.

The impact spun the Fiesta around, and it came to rest facing north on the same shoulder.

The driver of the Fiesta was wearing a seatbelt, and the airbags deployed, but she was killed on impact, the release says.

She has been identified as Melody Young, of Colorado City, Arizona. Next of kin has been notified.

The male driver of the F250 was wearing a seatbelt, and the truck’s airbags deployed. He suffered a broken leg and was transported to Dixie Regional Medical Center, where he was treated and released.

He has been identified as Matteus De Gasperis, of Hurricane.

Officials do not suspect that excessive speed, drugs or alcohol played a role in this crash.

“During the preliminary investigation,” the UHP news release says, “we suspect that the front left tire of the F250 had tread separation, which caused the driver to brake and lose control. The front left tire was a ‘spare’ and appears to be 17 years old.” 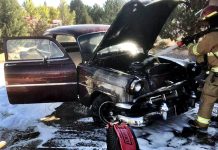