PROVO, Utah, Nov. 21, 2021 (Gephardt Daily) — A woman was rescued Sunday after she became trapped in mud near the shore of Utah Lake.

The 19-year-old woman was in the mud for about two hours Sunday evening after the boat she and her father were in became stuck in water in the Provo Bay area.

Utah County Sheriff‘s Sgt. Spencer Cannon told Gephardt Daily the water at that location, about 3/4-mile from the shore, was only 2 to 3 inches deep and very muddy.

The young woman got out of the boat and tried to free it by pushing it, and she became stuck herself.

Police were notified at about 5:30 p.m., and Cannon said the woman was trapped in the  mud for roughly two hours before the sheriff’s office search and rescue volunteers were able to free her from the 3-foot-deep muck.

Cannon said the woman experienced hypothermia during her ordeal, and that was the main concern.

“She was taken to the hospital by ambulance but should be OK,” he said.

Getting into a position where rescuers could overcome the suction of the mud and lift the woman out was another concern.

“And lifting her out without dislocating or straining muscles, joints, and tendons was also another challenge,” Cannon said.

Provo Bay is about 3/4-mile west of Interstate 15. That is between University Avenue and State Route 75 (North Springville exit) on the west side of the freeway.

The incident occurred near a boat access area off Mud Lane, which runs along I-15 southbound.

There have been quite a few rescues there in the past, Cannon said, and rescues are often complicated because of the reeds in the area that grow as tall as 8 feet and make finding the person difficult.

It can be a tricky process because the rescue crews also can get stuck in the deep, wet mud, so the sheriff’s office maintains watercraft specifically designed to go into areas of extremely shallow water. 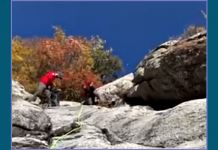 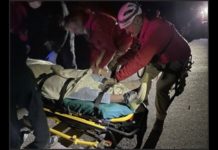