Erin tries out a night of sultry looks and complex hip moves to see what turns women of all body types and sizes into a sultry sex kitten! You can learn a few moves yourself on ‘The Todd and Erin Morning Stream” today.

The Todd makes a truly ill-advised decision to confront the “attack pigeons” at Sugarhouse Park in an attempt to show us how to handle them. He’s bloody, but unbowed.

Just what does United Airlines have against leggings? They threw two 13 year olds off the flight for the — gasp — the shame of wearing leggings.

What about the passenger who crouched down in front of us and let her low-slung jeans show her entire behind? Where were you THEN, UNITED?

And Stephen Hawking is auditioning celebrities to be his new “voice.” See the awkward audition process here on “The Todd and Erin Morning Stream.” 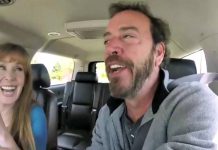 Baby animals, how NOT to text and Tales From The Front Seat! ‘The Todd and Erin Morning Stream’ — April 25, 2017