WEST VALLEY CITY, Utah, Oct. 7, 2018 (Gephardt Daily) — Officials are searching for at least one suspect who allegedly ran from a scene after numerous reports of shots fired were received in West Valley City Sunday morning.

Maurer said the incident began when officials started receiving calls of possible shots fired in the area of The Redwood Apartments at 4000 S. Redwood Road at approximately 11:25 a.m. Sunday.

“Officers were en route to the scene and at the same time we started getting additional calls of an accident in the area,” Maurer said. “So when officers got here it was kind of a big scene. When the first officer first arrived on scene he found a vehicle at the entrance to the apartment complex here on Redwood Road, that was in an obvious accident, and the driver wasn’t to be located so we had additional officers come into the area and start canvassing the area to see if there had been shots fired, or possibly somebody injured in an accident.”

During the canvas, Maurer said, officers did locate a scene that had evidence of a shooting. Casings were located as well as some property damage to a building and a vehicle in the parking lot.

“We requested some additional assistance in canvassing the area looking for any suspects that were outstanding or any parties that may have been injured,” Maurer said. “We found the second vehicle that was involved in the accident, within the apartment complex.”

She said it appears the first vehicle, a Buick, was leaving at a high rate of speed from the apartment complex, when it got into an accident with an SUV that was entering the complex. Police believe those that were in the Buick may have been involved in the shots fired incident, while it appears the SUV was not involved.

She added at this time there have been no reports of injuries in the apartment complex or the surrounding area to the south of the complex.

Maurer said investigators are processing the scene; collecting casings, taking photographs and looking to the south of the location for one or more parties that were reported to have left on foot running southbound.

Police also searched a CVS Pharmacy at 4082 S. Redwood Rd. as someone matching the description of one of the people seen running from the apartment complex was possibly seen there. The employees and customers were brought out of the store and the store was searched but no suspect was found.

“At this point we have individuals that are outstanding and we’re still trying to determine if they’re suspects or just involved parties,” Maurer said.

Officials are in the process of impounding the Buick and will do an inventory of the vehicle to see if anything inside correlates to the shots fired call.

The only description police have of the person that was thought to be driving the Buick is that he is between 5 feet 7 and 5 feet 9 inches tall, wearing a puffy jacket. 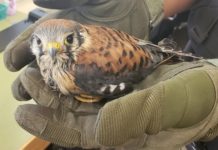