BRIDGER-TETON NATIONAL FOREST, Wyoming, Jan. 1, 2018 (Gephardt Daily) — A snowmobiler from Spanish Fork died after he was buried in an avalanche in southwestern Wyoming Friday, officials said.

Brennan Walpole, 35, passed away in the hospital after the slide in the Commissary Ridge area of the Salt River Range, the Bridger-Teton Avalanche Center said in a news release.

Officials said Walpole was part of a group of 15 to 18 snowmobilers from Utah. Walpole was following another snowmobiler, sidehilling across a steep slope when the avalanche broke at approximately 1 p.m. Sidehilling is defined as riding a snowmobile on edge, tipped with one ski in the snow and one in the air.

“The second rider on the slope (Walpole) was buried for 8 to 10 minutes,” the news release said. “Two other riders were partially buried but not injured.”

The group was able to dig out Walpole, but he was unconscious. They began CPR, and the victim was subsequently flown to Eastern Idaho Regional Medical Center by medical helicopter, where he died.

The news release said that the slide occurred on an east-facing slope around 9,700 feet in elevation. 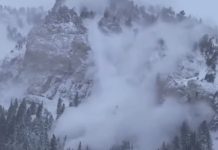 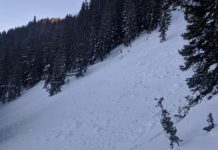