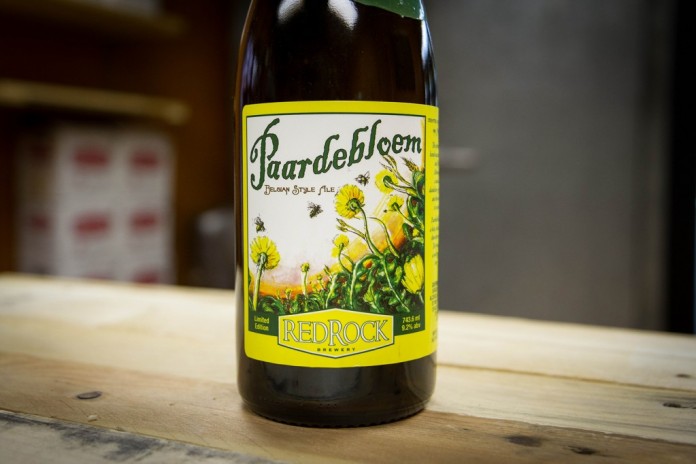 “We have been making our Paardebloem beer since 2008,” said Red Rock Head Brewer, Kevin Templin. “Paardebloem, the Flemish word for dandelions, is made out of dandelions, and it’s a beer I am really proud of. It’s very rewarding when I see people at festivals, or restaurants drinking the beer I have made.”

Templin and Chris McComb, a former brewer of Red Rock, and current engineer at New Belgium Brewery, collaborated on the beer after threat of a hops shortage in 2008. “We decided that we wanted to create a beer that was hops free after our hops distributor demanded we sign a long term contract. We knew right away we needed something very bitter,” said Templin.

“And bitter is exactly what we found,” said Chris McCombs. “While visiting my sister, we went on a hike in American Fork. We had a Utah plants guide and we were sampling various plants along the trial. My sister tasted a dandelion green, turned to me and said ‘hey, you’ve got to try this.’ I realized pretty quickly this would work very well.”

And so the pair began experimenting with various recipes to create the Paardebloem beer. “We perfected the recipe using dandelion greens, and peaches. The beer has actually gone on to win several prestigious beer awards, and we couldn’t be more thrilled,” said Templin.

Gephardt Daily was given special access to the brewery and was able to watch Templin, McCombs and the other brewers of Red Rock Brewery create this very unique beer. “One of the reasons our beer is so unique is due to how we age it. A portion of the batch is placed in Chardonnay barrels for about a year. We then blend the aged batch with the newly created batch, and it works quite well,” Templin said.

And it seems that this beer works quite well as fans have lined up every year since its inception to get their hands on the beer. “Last year we sold out in just about 72 hours. We sell the beer at our brew house, as well as our three restaurant locations. We’ve decided to make a bit extra this year to meet demands,” said Templin.

But even with an extra batch, it wasn’t enough to keep the beer in the cooler till the end of Friday evening. The beer sold out at their brew house before 1 p.m. on its opening day. “When it’s gone, it’s gone. It may last at our restaurant locations through the weekend but you never really know,” said Templin.

If you were one of the lucky ones to get your hands on this seasonal beer, McCombs said not to treat it like the beer you might buy at the grocery store. “I like to pour the beer into a wide mouth glass,” he said. “This really helps the beer breathe. When it comes to drinking the beer, I like to do a drive by, which is a long smell of the beer. Then get the aromatics going by covering the top of the glass, and swirling the beer to open up the flavors.”

Paardebloem is released every spring so if you didn’t get your hands on it this year, there is always next year.