Oct. 5 (UPI) — One person was killed and two others were critically injured when a seaplane they were flying in crashed into a concrete pier in Queens, New York City, on Sunday, officials said.

The New York Fire Department said via Twitter that the single-engine seaplane crashed into a Long Island Sound pier at about 3 p.m.

“Witnesses said that the plane was traveling rather fast along the water, skipped twice and hit the pier,” Fire Commissioner Daniel A. Nigro said during a news conference from the crash site. “An investigation will proceed into how this accident occurred.”

Responders arrived within minutes of the crash being reported to find two of the plane’s occupants had already been removed by a “good samaritan” who attempted to administer aid, while a third victim was removed by members of the FDNY, he said.

The pilot and one of the two passengers were transferred in critical condition to local hospitals while a second passenger had died, he said.

Two others, including the civilian who removed the victims from the plane, were injured and were treated at the scene, he said, adding that the FDNY HazMat units have offloaded the planes’ remaining fuel.

NYC Mayor Bill de Blasio tweeted that emergency crews were at the scene.

“Please keep these people and their families in your thoughts tonight,” he said. 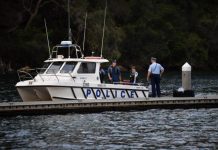