MANILA, Oct. 19 (UPI) — Though Typhoon Koppu has weakened in intensity, major flooding was a concern Monday in Philippines, where 11 have died from the storm.

The slow-moving typhoon hit the country’s northwestern islands Sunday morning, making landfall at the town of Casiguran on the Philippines’ main island of Luzon. The storm featured winds up to 124 mph.

The Japanese Meteorological Agency on Monday downgraded the typhoon to a tropical storm with wind speeds of 93 mph. Flood waters prevented rescuers from reaching victims and more than 3 feet of rain was forecast for Luzon between Monday and Wednesday.

“We haven’t reached many areas. About 60 to 70 percent of our town is flooded, some as deep as [39 inches],” said Henry Velarde, vice mayor of the town of Jaen. “There are about 20,000 residents in isolated areas that need food and water.”

Typhoons are common in the Philippines, but Koppu’s slow movement toward Taiwan, and its 372 mile wide path suggests rain will be constant and heavy for several days.

Koppu is the 12th storm to hit the Philippines this year. The country averages 20 storms and typhoons annually. 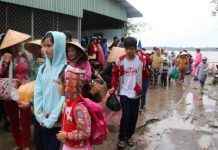 Vietnam braces for typhoon which left 230 dead in Philippines 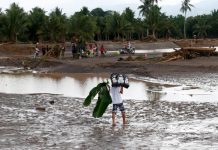 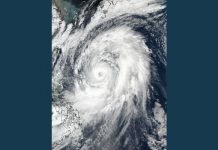