Jan. 20 (UPI) — Twelve National Guardsmen, including two who had made “inappropriate” comments online or in text messages, have been removed from inauguration duty in Washington, D.C., military officials said.

National Guard Chief Army Gen. Daniel Hokanson in a press conference with Pentagon spokesperson Jonathan Hoffman on Tuesday confirmed that 12 National Guardsmen have been removed from duty “out of an abundance of caution” after being flagged during a vetting process of the more than 25,000 troops in the nation’s capital to provide protection for Wednesday’s inauguration of President-elect Joe Biden.

The two Guardsmen in Washington, D.C., who made inappropriate comments are being sent home, he said, one of which was identified through the chain of command and the other through “anonymous reporting.”

The other 10, he said, were flagged due to questionable behavior.

“I am not concerned as a large part of our organization,” he said. “If you look at 25,000, we’ve had 12 identified and some of those they are just looking into, it may be unrelated to this, but we want to make sure out of an abundance of caution, as I stated earlier, that we do the right thing until that gets cleared up.”

Hoffman explained the military is not taking any chances, and if anyone’s name is flagged during the vetting process, they will be removed.

“Much of the information is unrelated to the events taking place at the Capitol or to the concerns that many people have noted on extremism,” he said.

The criteria for which a member will be flagged is determined by the FBI, which is conducting the vetting process, Hoffman said, adding that they are not inquiring as to the reason for the raised flag and an investigation will be conducted later.

The vetting process is being conducted as some 25,000 National Guardsmen have been deployed to the nation’s capital to provide support to local and federal law enforcement following a siege on the Capitol building on Jan. 6 and the arrests of former and active military personnel on charges of having participated in the attack that resulted in the deaths of five people, including a veteran of the U.S. Air Force.

Hoffman said that those being removed from duty have not necessarily shown sympathy to those who stormed the building or harbored extremist views.

Hoffman said he was unaware of how many of the 25,000 troops in the Capitol have so far been vetted.

On Monday, Acting Defense Secretary Christopher Miller announced that all National Guardsmen would be vetted for insider threats, stating that it was being conducted despite there being “no intelligence” indicating such threats existed in the military ranks. 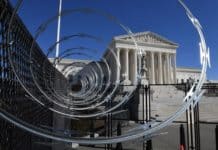 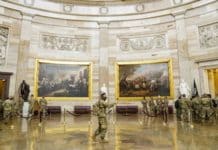