The rural church on South Africa’s eastern coastline was filled with congregants Thursday night for the start of a Passover service to begin Easter week events.

A preliminary investigation cited the heavy rains as a primary factor in the structural collapse. KwaZulu-Natal Premier Willies Mchunu called for an investigation into the safety of the building.

“It is an act of nature, an act of God,” municipal official Lennox Mabaso said.

Emergency officials were expected to visit the church site Friday. 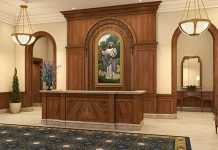