Feb. 18 (UPI) — At least 13 states joined together to sue President Donald Trump over his declaration of a national emergency at the U.S.-Mexico border, California’s attorney general announced Monday.

On Friday, Trump announced a national emergency so he would bypass Congress to fund a wall on the United States’ southern border. This would give him special powers to redirect federal money dedicated for other projects.

Congress refused to provide Trump with the full funds he requested for a wall as part of a spending bill passed last week.

The latest offer from Congress allows $1.7 billion in border security improvements. Trump has asked for $5.7 billion with the understanding that part of a permanent wall, covering about 128 miles, will be constructed with the funding.

“The president admitted that there’s not a basis for the declaration, he admitted there’s no crisis at the border, he’s now trying to rob funds that were allocated by Congress legally to the various states and people of our states,” Becerra told MSNBC on Monday. “The separation of powers is being violated, we’re going to go out there and make sure that Donald Trump cannot steal money from the states and people who need them, since we paid the taxpayer dollars to Washington, D.C., to get those services.”

Trump, speaking on Friday to announce the declaration of emergency, said he expects lawsuits to slow his fulfillment of a campaign promise to construct a wall.

On Sunday, Lawrence Pacheco of the Colorado Attorney General’s Office announced that Colorado will be included in the multistate lawsuit.

Advocacy groups are challenging the declaration as well. A joint lawsuit was submitted over the weekend by the Center for Biological Diversity, Defenders of Wildlife and the Animal Legal Defense Fund. It cited the constitutional separation of powers, by which only Congress can address budgetary matters, as well as an alleged environmental threat at the border.

“Many species of animals, including endangered species, are put at risk by this project, and all alternatives that protect wildlife and the environment must be considered by law. We will continue to pursue all legal avenues to assure the law is upheld,” said the Animal legal Defense Fund’s Stephen Wells in a statement.

Human rights advocacy organizations have also announced lawsuits against the declaration, including the American Civil Liberties Union, Public Citizen and Citizens for Responsibility and Ethics. 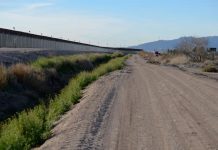