Nov. 20 (UPI) — A customer at a Sephora makeup store in Georgia snapped photos of what she said was $1,300 worth of makeup destroyed by a small child.

Brittany Nelson posted photos to her Extraordinary Life Makeup Artistry page on Facebook showing a display at the Augusta store that had been smeared and destroyed by what she said was a young child.

“PSA: $1300 of Make Up Forever eye shadow destroyed at Sephora tonight due to a small child. I’m sure he/she thought they were like finger paints and had no idea how naughty they were being. Tons of destroyed product and pissed Sephora cast members are a not a happy place to be,” Nelson wrote.

She said she did not see the incident happen, but she caught a glimpse of the likely suspect.

“We walked in right as a lady and her kid were hustling out of there,” Nelson told website Insider. “The glittery footprints helped us decipher it was a tiny human.”

Nelson’s post, which went viral on the social media site, encouraged mothers to leave their “tiny humans” at home when shopping for makeup.

Nelson told Insider her post was “not mom-shaming or kid hating in the least,” despite the reactions of some commenters.

“I woke up to the internet mob of insanity because of my one cranky post,” she said. “I honestly don’t think I said anything 99% of people don’t think anyway so I’m not that devastated by the hurricane of it.” 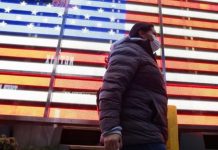