Dawnta Anthony Harris appeared in court Tuesday where a judge ordered him held without bail at an adult detention facility. Police arrested three other teens in connection with Caprio’s death, though no charges have been filed.

Police captured Harris and his alleged accomplices Monday night, several hours after Caprio’s death in Perry Hall. She was responding to the report of a suspicious vehicle at 2 p.m.; the caller said they saw multiple teenagers get out of a black Jeep and walk around homes on Linwen Way before breaking into one of them, the Baltimore County Police Department said.

Harris was inside the Jeep when Caprio, 29, arrived on the scene. He told officers she told him to get out of the vehicle before he hit her with the vehicle and drove over her.

“He admitted that he partially opened the driver’s door, but then shut it and drove at the officer,” Harris’ charging document says.

Maryland Gov. Larry Hogan initially said Caprio died from a gunshot wound, but her cause of death was head trauma due to being hit by the vehicle.

“Officer Caprio was a dedicated member of the Baltimore County Police Department who was soon to celebrate four years with the force,” Hogan said Tuesday. “She bravely made the ultimate sacrifice for the safety and security of our citizens, and we all owe her a debt of gratitude for her selfless service.”

Police said they believed the Jeep involved was used in another burglary. Harris has been accused of stealing four vehicles since December and had disappeared from house arrest days before Monday’s incident.

“Your client, in the last six months, is a one-man crime wave,” a Baltimore County judge said during Harris’ bail hearing. “I’m not sure any facility is secure enough to hold him.”

Caprio’s family scheduled a viewing Thursday, and a service and funeral Friday.

“Officer Caprio is the type of officer that you want to hire … smart, athletic, energetic, and with not quite four years on the job was starting to show that she had the potential to be an excellent officer and one of the leaders of this organization in the future,” Baltimore County Police Chief Terrance Sheridan said. “She was the kind of officer that was going to go up in this organization and lead.” 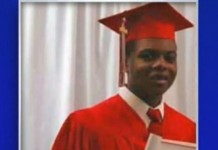